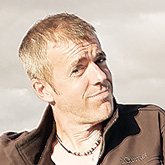 I've used a dozen other languages besides what is listed here. (Lua, VB, AutoIt, Python, and a few bizarre variants of JavasScript to name a few.) I'm comfortable with back-end development, but prefer the front-end where I can engage my sense of UI/UX design.

Automated video production process for company to produce custom-branded videos for venture partners at a fraction of time and costs.

Wrote several Adobe plugins used by thousands of Flash Developers to automate and speed up various animation and layout tasks.

Played multiple roles, predominantly automation development. Led the architecture, prototyping, and development of a sizable build, test, and deployment automation solution for a key $1.6B client in the financial sector.

Also assisted in developing marketing content, strategy, and messaging for Linqto as we worked to make the transition from a service-based revenue model to a product-based one.

I typically provided clients with design and content services in addition to front-end HTML/CSS/Flash AS3/JavaScript/jQuery coding and occasional back-end (PHP/MySQL) support. For a sample listing of clients, projects, and demos please visit www.DuneThomas.com.

Managed artists, maintained production schedules, interfaced with clients, and successfully built well over 100 tours, writing and producing for top companies such as Fuji, Canon, Epson, Sony, Pentax, Netgear, SanDisk and many others. 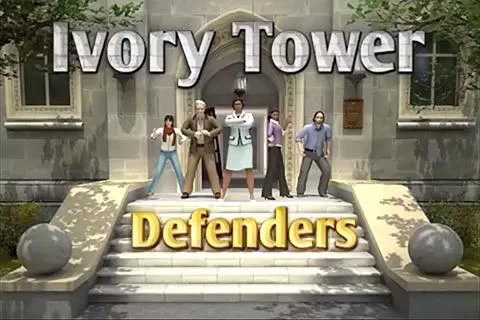 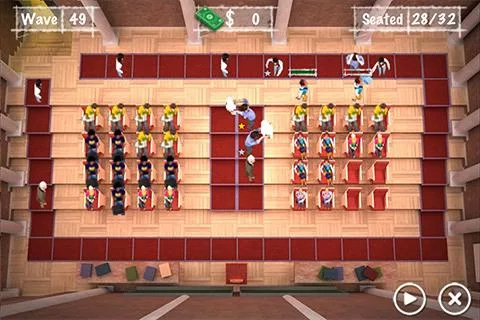 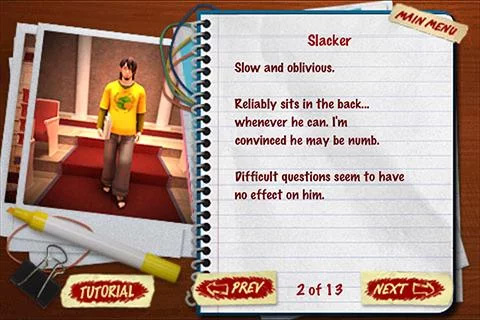 Coded from start-to-finish a mobile “tower defense” style action/ strategy game called Ivory Tower Defenders, which was recently launched on both the iTunes Apple Store and various Android markets such as the Google Play Store.

Though simple in appearance, the path-finding issues in this game were very complex. Students (runners) would each follow different paths according to the type of student they were. This was altered by which empty seat each student was nearest to. Finally, if a student was defeated or sat down, all other runners on the screen must immediately respond by recalculating seat distances, competing student choices, and a variety of route options.

The problem is that this must be done very quickly and on every frame that the display was refreshed. Which would have been tolerable if there weren’t timing issues due to processor/display engine limitations. If the timing wasn’t perfect, identical choices by a player could result in different outcomes in the game, which would be unacceptable as it defeats the point of the game mechanics. 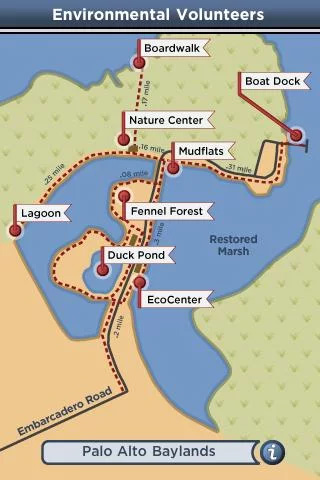 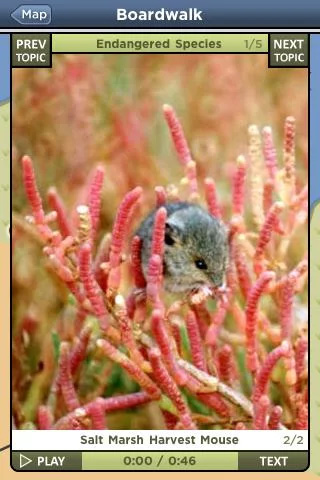 This mobile app was designed to give visitors to the Palo Alto Baylands Nature Preserve an interactive, self-guided walking tour of the wetlands. In addition to handling all programming for the app, I covered various design and audio tasks, and provided the narrative voice-overs for the app’s feature locations. It is available for both iOS and Android devices.

(Also, 2 years later I built a second version of the app in Español.)

During a time when IE6 (a notoriously 'ill behaved' edition of Internet Explorer) was in wide-spread use, I became a tad obsessed with finding a better way to code websites that could properly handle all dominant browsers including IE6 with a common, strictly CSS/HTML solution. I started collaborating with a designer who would give me designs in Photoshop that I would then convert into HTML & CSS, or form into WordPress Templates.

I developed my own method, called the “QuadBox Method” of web development. The result was a coding system that would produce perfectly uniform site layouts across all major browser platforms, even IE6 (whose full name should not be spoken aloud lest we risk it rising from the dead). To make development even faster, I built a plug-in for Photoshop, complete with a sophisticated UI panel, that allowed me to quickly select and define different layout components and structures directly in Photoshop. When done, my system would generate a very clean, perfectly standardized W3C-compliant HTML & CSS coded website templates.

Admittedly, while these tools did reduce turn-around time, their value was short-lived. The need for such an approach diminished in direct correlation to the drop in IE6 usage, and the rising adoption of HTML5/CSS3 and jQuery. 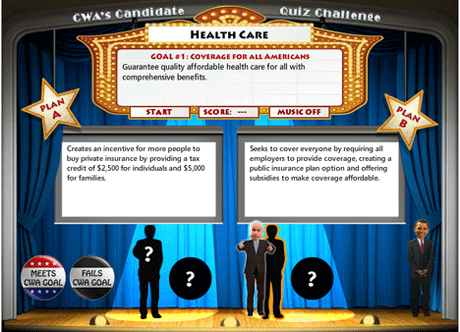 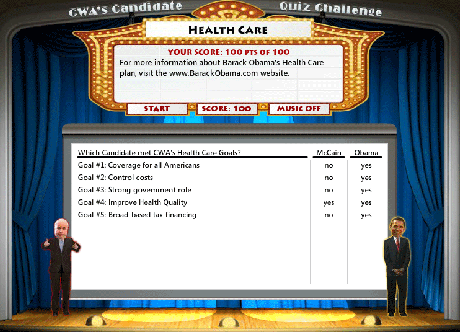 CWA wanted an interactive Flash-based quiz-format game to inform participants about Barack Obama’s and John McCain’s respective healthcare platforms during the 2008 presidential election. All they had were a simple set of questions and answers, and they wanted a way turn this into a quiz of some kind that would be fun and engaging.

The result of this 6-week project is what you see here. This was a truly ‘built from scratch’ effort as I handled every last thing from the sound effects and graphic design to the animation and coding.

The app uses an XML back-end with a simple question/answer editor. As a bonus to leverage CWA’s efforts, the app was designed to be easily updated to run other quiz-games with different token graphics. 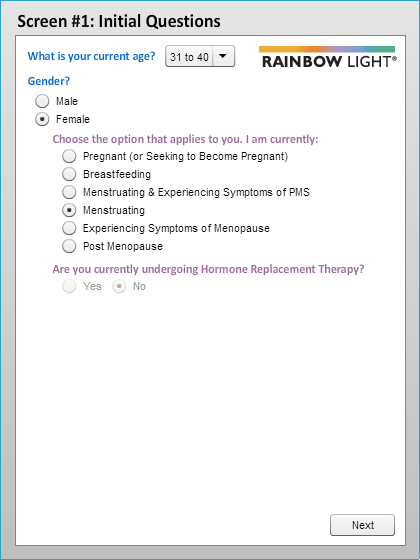 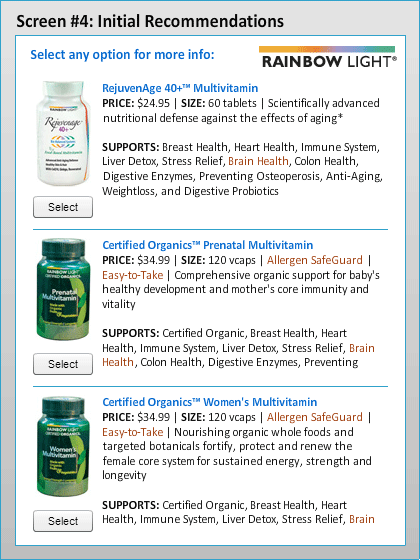 Rainbow Light Nutritional Systems offers a numerous selection of multivitamin and calcium supplements, each suited to the needs of specific customers. RLNS needed a way to help customers find the products that were tailored to their needs.

Given an excel spreadsheet of their products and features, I created a pair of web apps that would walk a potential customer through a set of questions about their wants and needs. The app then suggests up to 3 products to meet the user's criteria for a multi-vitamin or calcium product. If interested, the user can choose to purchase the product, connecting to the store directly from the app.

These apps make use of a MySQL database to gather anonymous user data to further provide RLNS with valuable feedback about their customers. I also set up and connected an email marketing campaign/service for the company, and added an opt-in feature to the apps so interested customers can subscribe to receive company email offers. 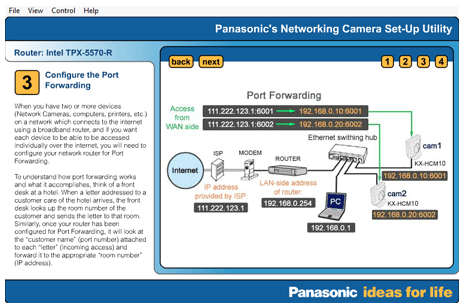 Developed UI and software for a consumer class Panasonic security camera, allowing consumers to control the camera remotely through a standard web browser. The software and UI was embedded into the camera so it could be used out-of-the-box. This is the oldest project on my portfolio, but I’m listing it because it was done when this sort of remote access technology was still rather new stuff.

Several years ago I coded a series of plug-ins for the Adobe Flash authoring tool. (Part of Adobe CS4 and CS5 software suites.) These have since been downloaded and used by thousands of Flash coders and animators. The plug-ins helped Flash developers to automate and speed up various animation and layout tasks. While I wrote several of these plug-ins (including a set for Photoshop as well), I have only included this single example.

The link is from a video used to demo how of one of my “FlashWhip” Adobe Flash Animation plug-ins worked so you can see it in action. 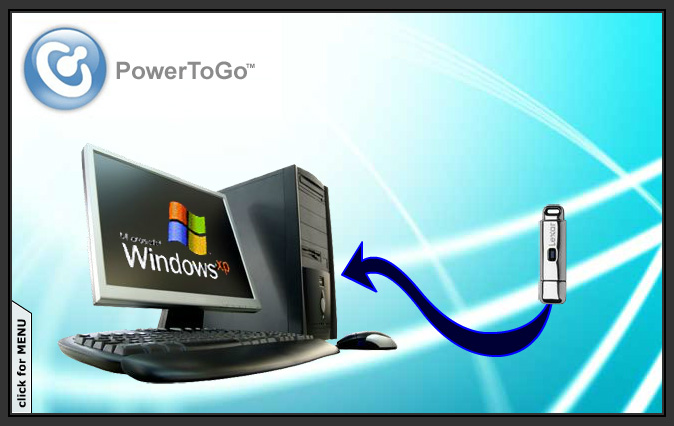 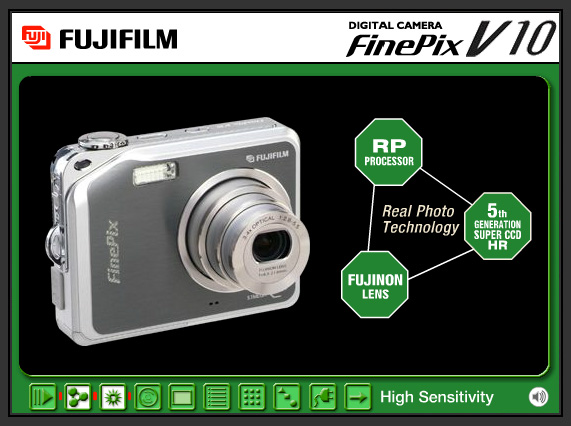 Here are two average examples of the literally dozens of product tours done for various high-profile clients such as Sony, Canon, Epson, Netgear, Pentax, Fuji, Avaya, Lexar, SanDisk, SlingBox, and many others.

These interactive demos were all created in Flash, which was a tricky feat to pull off… the Flash Player had big timing issues when it came to playing audio. Voice over synchronization would slip because the Flash player would drop frames to keep up visual playback speed, but it did this without dropping audio frames. That meant 30 seconds into the tour, the VO would be talking out of sync like a bad kung-fu movie.

Finding a solution to this problem meant our studio was the only one at the time that could produce these interactive product tours with voice overs tracks that remained in-sync during playback. In addition, some clever pre-loading kept performance smooth regardless of presentation length or user bandwidth.

Have worked with Dune Thomas on various projects for over seven years. Would recommend him highly to anyone seeking the rare combination of left and right brain skills.

As a software engineer, he can solve for extreme programming puzzles. As a designer/producer, he will make any product look good... My recommendation is five stars.

Dune is a fantastic developer... a programmer who genuinely cares about quality and will push through walls to make things work. I can think of 2 major issues (memory leaks and a complex pathfinding algorithm) we had with the game app which could have easily stopped other coders, but he came up with creative solutions that worked.

Dune actually documents his code and is very well organized. So if he's working in a team or his code has to be worked on by another programmer later on, they have a good chance of understanding what he did. I've been working in the interactive world long enough to know how rare this is.

On top of all that, he has a great sense of humor and makes working together fun. I can't recommend him highly enough.

I hired Dune as a code / developer / design exec waaay back in 1997. This guy is amazingly balanced between the right and left brain - both highly creative and highly technical. To be honest, it's a combo you don't find very often - so snap him up while you can!

...and I want to say this - he's a first class human. You couldn't do better.

Dune is that rare find: personable, fun, reliable, and relentlessly dedicated to high-quality work. I heartily recommend him for anyone seeking an expert coder for web or mobile projects.

I’m most familiar with Dune’s Flash, design, scriptwriting and video skills. Dune is an endlessly creative and technically savvy problem-solver. High integrity, great communicator, a lot of fun to work with. Whoever gets him on their team or project is very lucky.

As a software engineer, he can solve for extreme programming puzzles. As a designer/producer, he will make any product look good... My recommendation is five stars.
Dune is an endlessly creative and technically savvy problem-solver...
Whoever gets him on their team or project is very lucky.
Dune is that rare find: personable, fun, reliable, and relentlessly dedicated to high-quality work.
Dune is a fantastic developer... a programmer who genuinely cares about quality and will push through walls to make things work.
This guy is amazingly balanced between the right and left brain - both highly creative and highly technical. To be honest, it's a combo you don't find very often - so snap him up while you can!
He not only does a great job but also never fails to have a terrific attitude regardless of the challenges presented to him. His energy and sense of humor are definitely missed...
Have worked with Dune Thomas on various projects for over seven years. Would recommend him highly to anyone seeking the rare combination of left and right brain skills.
Dune really knows his stuff... Constantly trying to make things easier, faster, better. Wildly creative, always willing to share what he knows/teach/listen. Tech savvy, artistic, and a lot of fun.
Dune is a delight to work with... He was especially helpful during the brainstorming phase, getting a clear sense of the project scope and goals very quickly and providing suggestions and creative input that improved the app overall.
I heartily recommend him for anyone seeking an expert coder for web or mobile projects.
Dune is not just a smart and very talented coder, he's also a dogged problem-solver with a great eye for detail...